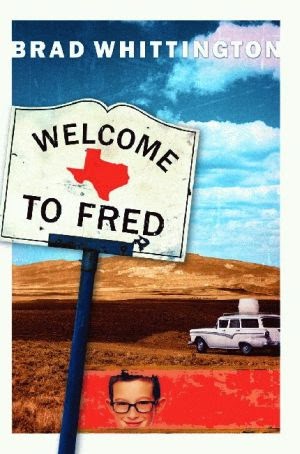 I have been reading your book Welcome to Fred aloud to my children at night. Sometimes, I take it in the truck with us to read aloud as my husband drives us around town. (Sometimes we drive around to get the baby to sleep, other times to soothe the grown ups.) Most of the time, I sit in the hallway between the children’s bedrooms and read to them as they settle in for sleep.

I chose your book because my oldest son has just turned 14 and I thought he would appreciate the point of view afforded by someone around his age and stage in life. The younger two are not far behind in age and they all loved The Wonder Years. I figured this would be a light-hearted way to introduce a variety of subjects that they might have on their mind but not know how to bring up. Also, I am a preacher’s kid myself and I thought it might be nice to help them understand what is wrong with their momma. 🙂

I just wanted you to know that there has been a lot of laughter and good conversation. The-10 year-old has taken to saying “Bingo was his name-o!” as if it was his very own idea.

And I wanted to thank you for last night.

You see, three days ago we buried a friend of ours. He was killed suddenly in an accident at work. (Electrician) His name was Donald and he was a very good guy. He could always be spotted around the ball field with a great big smile. He was a friend to my kids but also to everyone he met. He always had a cooler full of Gatorade or ice water to give out to the kids who were running around the park all hot and thirsty. And a pocket full of bubble gum too. He was only 42. He left behind a teenage son, friend and teammate to my 14 year old.

It has been a sad week at our house.

Last night we landed in Chapter 15 where “Old MacDONALD” was in a tragic accident, and the town of Fred buried two people whose time was up too soon, and Sonia’s feelings mirrored many of the same ones we’ve been taking turns with around here this week.

I wanted to tell you about how the kids were drawing out as much from the chapter as they could to relate to their own pain. How they moved from lying in prone and supine positions to perched on the edges of their beds Indian style, leaning toward the hall to hear better, asking me to read a part again, looking for more connections than existed. (“Mom, what was the day of the week Mr. Donald died again?”)

I will admit, I had to stop and compose myself a few times in order to keep reading without a trace of tears in my voice. And then, from his fictional pulpit, Pastor Cloud spoke real words of comfort and understanding to a couple of real-life kids in their bed. Like in The NeverEnding Story where the ChildLike Empress begins to speak to Bastian.

Anyway, thanks for the timely words.
~jc

Update Aug 1, 2012: The author of the email described below is also the author of the amazing book, Help Me Be a Good Girl Amen. I stayed up past 4am reading it. You can read a sample at the link.

One of the best things about being published is hearing from readers. The reviews for Muffin Man are all entertaining to read, even the the two-star reviewer who claimed it wasn’t as engaging as Russo’s Pulitzer-prize-winning Empire Falls (in my dreams!) and who ended the review with:

I going out to eat a donut now. bye

Which I took indicate that the muffin may have had  a greater impact on him/her than he/she thought.

And nothing tops the review from IZONPRIZE that opens with:

Brad Whittington had me dedicated to the final page, from Day 1 like a momma chimpanzee looking for fleas on her only child.

But a recent email has the most unusual story associated with reading my books that I’ve received to date.

My eyesight is pretty bad, since I am now 86, so my daughter bought me a Kindle and I get to read anything that she has loaded in. I am REALLY enjoying the Fred stories.

I appreciate your rich vocabulary, which you use so extravagantly. I suspect a lot of folks don’t know what treasures you draw from.

I was getting such a kick out of your story this afternoon that I forgot I had put five eggs on to boil, and didn’t remember them till they started exploding. After the third shot-egg blast I got up and found egg parts all over the kitchen, and a horrible stink besides.

But — so — on with the book. Thanks so much for writing the way you do.

If I wasn’t already driven to write incessantly, emails like this one would do the trick.

Keep those cards and letters coming.