How many novels have a signature cocktail? I know of only one.

I selected many of the locations in The Reluctant Saint by using Google Maps to find places near each other for a scene or chapter, which was how I discovered the Lovecraft Bar.

As a rule, I don’t drink cocktails, so when I discovered that Hensley would have a strategy session at the Lovecraft, I reached out to my resident expert in Vegas via FB message at 2 a.m. 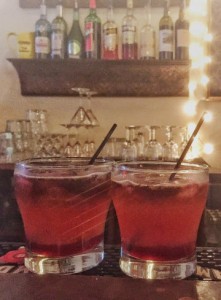 Thus it was that the Defenestrated Zombie came into being through the auspices of one Jeremy Grigg, the Groover of Perth, who divined the perfect ingredients.

Of course, any zombie must contain light and dark rum. Due to the Defenestration of Prague, we required a Czech liqueur, and Becherovka came to our aid.

However, the drink as conceived by The Griggster and described by Ermen in Chapter Twenty-Nine is impossible to make, due to the largely imaginary nature of Gummidge’s Wort (although the etymology of “wort” is interesting in this context, as is a perusal of the story of Worzel Gummidge) and the inadvisability of ingesting formaldehyde. (For the record, one would have to drink 200 Defenestrated Zombies to get a lethal dose of formaldehyde, whereas the alcohol would get you after 20 drinks or so.) 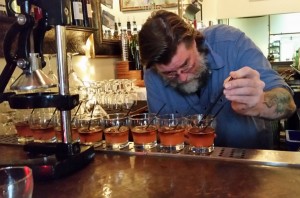 Consequently, I engaged the services of Chris Wall (aka Wally), gnome-at-large at Cafe Malta in South Austin. (Attendance required at your earliest convenience.) I told him the story and charged him with the task of creating a drink that could legally be assembled and consumed. He discharged his duties admirably. ( I featured Wally in Chapter Twenty-Seven, although I disguised his appearance.)

The complicating factor in this drink is the blood-orange syrup. If you can’t find any, you can make your own by reducing blood-orange soda.

Mix in shaker and decant into glass. Drizzle blood orange syrup into a layer on the bottom. Float dark rum on top.