On Friday I awakened and dressed while contemplating the day that lay ahead, a pivotal day for our hero, who finds himself faced with the unexpected mission of rescuing a teenager from a wealth of bad decisions. To that end, he must assemble a team of modern day knights-errant to join him in battle against nefarious foes.

It was going to be a long day. Hensley takes 12 hours to go through the paces, but I was unwilling to subject my sister to such a grueling schedule. We did it in about half the time.

Our first stop—City State Diner, where they serve up a mean breakfast. Net research had drawn me to the Bacon Brie Scramble, but consultation with our server redirected me to the Freddie, which was everything one could hope for and more. If you find yourself in Portland and in need of breakfast, run don’t walk to City State Diner.

After an excellent repast, we took the half-hour drive down to what turned out to be the location of the former Pacific Rim Martial Arts Academy, now a bank branch office. Hey, I do write fiction after all so I felt more than capable to fill in the blanks.

From there it was a mere two-mile jaunt to Jet Set Coffee in Tigard, a hip little joint with an impressive mural of the defunct TWA flight center at JFK, now the T5 JetBlue terminal. Thankfully,  there were no surprises, and I got some work done for the day job while my sister got in a good spell of reading.

Then it was an appetizer at the Olive and the Grape in Lake Oswego, a charming little bistro with and ambitious menu and a welcoming atmosphere. Highly recommended.

Next Hensley seeks out Sea Tramp Tattoo to recruit his next warrior. Net research revealed that between the time of the story (2013) and the time of the writing (2015), a fire forced Sea Tramp to relocate. We parked near the original location, still vacant, and like Hensley, grabbed a drink at Half Pint Cafe, located in the former freight elevator shaft of a warehouse. Marco serves up a mean brew. Come on down!

Thus fortified, we visited the new location of Sea Tramp. Here’s the thing about walking into a place and informing the denizens that they are the subject of scene in a novel. Some are effusive and honored. Others are curious. And yet still others are indifferent.

The good folks at Sea Tramp were quite friendly, but I must confess they seemed tolerant but less enthusiastic than I might have hoped upon receipt of the news that they were to be featured. But I have a sneaking suspicion that if you’re in Portland and you want a tattoo, Sea Tramp is the place to go.

And this brings us to the most iconic of locations in this memorable day in Hensley’s journey, the Lovecraft Bar. I found the Lovecraft through net research, as it was only two blocks from the former and current locations of Sea Tramp Tattoo. I was immediately captivated.

The Lovecraft is not a place that I would frequent, or even enjoy when it is in full swing, but it is true to the vibe of the infamous HP Lovecraft, creator of compelling stories of  existential dread.

As a teenager in Fred, Texas, I went through my requisite morbid stage and consumed everything written by Edgar Allan Poe. The meager stores of the library thus exhausted, I branched out to Lovecraft and could only endure one volume before turning to more congenial and lighthearted material. If you thought Poe could craft terrifying tales, and you would be right about that, then prepare yourself for the next level before opening a book by Lovecraft.

The place is everything one could want in such a dive. If Mick Jagger could get satisfaction, then he would find it in the Lovecraft,  because everything is painted black. Walls, ceiling, floor, furniture, stage, soul. All black.

As I said, not my vibe, but an incredible setting for a scene in a novel. As I mentioned before, Hensley carefully considers what he eats and drinks to acquire the makings of the quintessential experience. Consequently I pondered what  Hensley would order in this depraved environment, and realized I was not equal to the task for I know nothing of mixed drinks. But I have a wealth of resources at my command.

As I was writing, although it was an advanced hour, I saw that my main man of Oz, recently relocated to Las Vegas for business, was online. I pinged him, and together we constructed a hideous cocktail to match the location. The Defenestrated Zombie. Let us just say that it contains ingredients that are illegal to serve.

I later challenged Chris Wall, the bartender at my favorite lunch, brunch, and dinner spot, Cafe Malta, to create a legal version of this cocktail, and you can find the recipe at the back of the book.

Thus liberated, my sister and I crossed the street to the Nicholas Restaurant where Hensley goes to purge himself of the dreaded cocktail. He orders dinner as he receives devastating news that drives him back into the street. However we did not deprive ourselves of the goodness of the Nicholas and were rewarded with an excellent Lebanese dinner. Don’t miss it if you can.

As Hensley faces his crisis, he stops by two more establishments on Burnside, the B-Side Tavern and the Wurst. 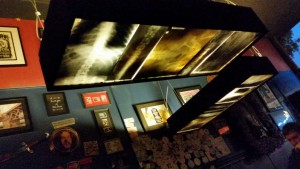 The moment we stepped into the B-Side, I commented that I felt like I had stepped into a Texas roadhouse. The vibe was identical. In an earlier episode, I discussed the cultural and spiritual elements that constitute the roadhouse experience, and the B-Side embodies these very elements.

First, although Portland enjoys the same non-smoking laws that Austin shares, there was the immediate whiff of cigarette smoke, wafting in from the back deck as we later learned. I am not offering a value judgment in regard to the smoking laws. I enjoy a smoke-free environment as much as the next person, but it served as a reference point of frontier defiance that resonated with this Texan.

The next thing that impressed upon my consciousness was that the light boxes above the bar had lenses that consisted of x-rays. Rib cages, pelvic bones, femurs. It was simultaneously startling and charming. Brenda, our bartender, was as friendly as any Texan you could hope to meet. If you can endure the trace aroma of cigarette smoke, it’s a friendly place to hang out.

Our last location to investigate was the Wurst, a more brightly-lit establishment with a horseshoe bar, arcade games, and a selection of bratwurst-based sandwiches. If we had taken the 12 hours that Hensley does in tracing his journey, I would have sampled one, but in our abbreviated schedule, I didn’t have room for that luxury.