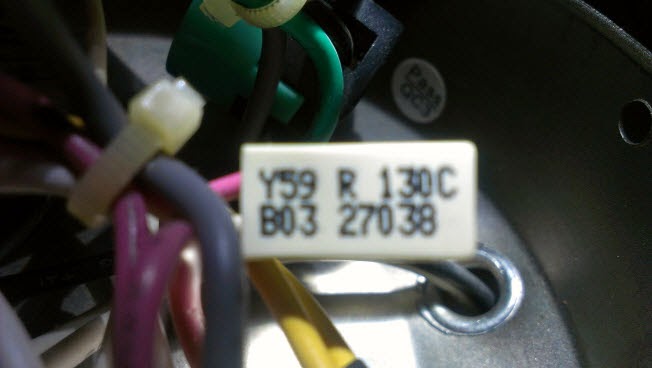 Then the lights on the ceiling fan went out and somebody had to figure it out, so I pulled the light kit off. No apparent problem. I called in The Helpful Neighbor, who has a tester and, more importantly, the brains to use it. We determined that power was coming into the unit.

The puzzler is that there is very little that can fail in this system. The only thing between the wall switch and the light bulbs is wire and a $3 pull switch, and the switch tested just fine.

After an inordinate amount of troubleshooting, The Helpful Neighbor noticed a component about half the size of my little fingernail buried among the wires. We speculated on its purpose, since you don’t really need electronics to run a light. I suggested that it was planted by the NSA to spy on us.

Before we bypassed it to see if it was the point of failure, I decided to Google ‘y59 r 130c b03 27038’ to make sure we wouldn’t regret it. It took us several minutes to recover from reading the link at the top of the search results.