It was bound to happen. I was in pretty deep—skipping work, trolling through all manner of neighborhoods, wandering down alleys, trying to score the perfect shot.

Then Jodi told me about the HOT Fair photography competition. They had categories and stuff. Just what I needed—an incentive to escalate my monomania.

Not that I’m competitive. No more so than the next man. Assuming the next man is Homer Simpson. Let’s put it this way. You know how some dads let their kids win at games?

I remember the day I beat my dad at chess. Do you think I would remember that moment 50 years later if he was in the habit of letting me win? No, he made that moment special with the knowledge that if I beat him, it was because I had earned it.

That’s part of the job of being a dad—to prepare your kids for the real world. Nobody’s going to hand it to them on a platter.

[note to self, find the fisher waiting for the firetruck photo]

One day I showed The Wiz a photo of my penultimate grandkid sitting on the curb. “He heard a firetruck. He’s waiting for it pass by.”

“You’re the granddad. It’s your job to go find that truck and make it pass by his house.”

“Nope. It’s my job to make sure he knows that you don’t see firetrucks by sitting on the sidelines waiting for them to come to to you. You have to go out and find them.”

[note to self, look at notebooks and albums for competition details]

But we’re talking about the HOT Fair photography competition. The deadline was only a few days away. I pored over my existing prints and then roamed the town and surrounding environs to fill in the gaps, burning through 24- and 36-exposure rolls like a pyromaniac. I submitted an entry for every category except flowers, but everyone knew that category was only for pansies. (I know it’s not a PC joke, but really the pun was just hanging there, and I couldn’t resist.)

When the fair opened, I rushed to the photography tent. Jodi was there, not especially pleased to see me or my photos. She would have won a few categories if she hadn’t told me about the competition.

I was walking along, seeking out my entries, when I came upon a clutch of girls clustered around a photo. 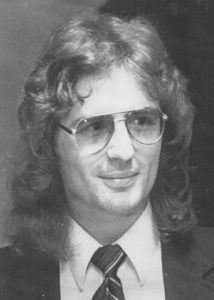 I looked where she pointed. It was the self-portrait I had entered into the competition, decorated with a second-place ribbon. 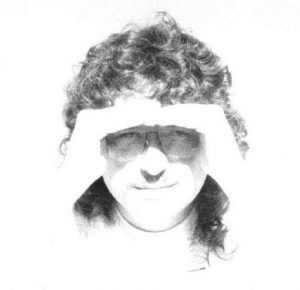 I was particularly proud of this shot because of what I had set out to do.

I set up the camera on a tripod in front of the house in bright sunlight, had Spyrison sit on the steps and shade his eyes. I then metered the shadow and set the f-stop wide for a shallow depth of field and a fast shutter speed to correctly expose the eyes. Then we traded places and he snapped the picture. As I anticipated, most of the detail was washed out, and the background faded into white.

Seeing the red ribbon on my self portrait, I released a silent cheer and backed away quietly before the girls noticed me. Koresh had come to a fiery end six months earlier, and I was afraid if they turned around and saw me standing there, they would freak.

A few years later I was doing computer work for a camera/photography store when I noticed they had a  competition with a deadline in two weeks. All entries had to be shot on Fuji color or Ilford black-and-white. I bought several rolls of each and spent the next ten days scouring the town for photos.

I told Nelson, a co-worker, about the contest. I’d been beating him at the HOT Fair competition for the last few years and he was out for revenge.

Two weeks later, Nelson won in the flower category. I took first or second in the rest and won the $500 grand prize with what is likely the best photo I’ve taken.

[photos of the competition]

Which meant that after the cost of film, processing, enlarging, and matting, I basically broke even. I don’t think Nelson wanted it bad enough. Maybe he had the wrong grandpa.

The firetruck isn’t going to come to you unless you’re on fire.