A BERF AND JAKE STORY

Take this simple test to determine if you should read Open Season.

Wouldn’t you like to hear this ad for Open Season on the radio?

Berford Oswald Wiggins follows a Code. That’s why he’s about to marry the wrong woman. Again.

When Berf finds himself accidentally engaged to Amelia for the third time, he leaps from the frying pan of Austin and absconds to the Payne ranch in Bolero, Texas.

But far from being the blissful autumn retreat of Berf’s dreams, the ranch abounds with plotters and strategerists. There’s the battle to the death for dominance in Bolero society, the secret search for Pancho Villa’s lost treasure, and the attempt to sell Tiny—a stud bull with performance anxiety.

Berf’s arrival starts a chain reaction that disrupts the delicate balance of the four couples staying at the ranch for the weekend. Suddenly it’s open season on four confused guys.

If he can’t set things straight, Berf will be married to the wrong woman before the year is out. 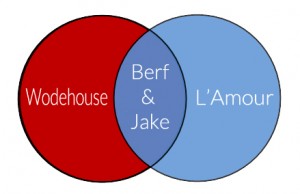